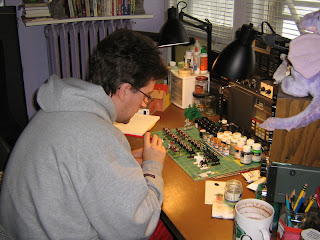 When school has been called off, and an old fashioned blizzard keeps you inside, what do you do? That's a silly question! You get a big mug of hot cocoa and head for the painting desk.

Sonja took advantage of her free day to catch up reading articles. I totally slagged off and began work on the third squadron of dragoons. Doesn't the regiment look nice all lined up there on the table?

I really want to make a push and get these babies finished in the next week or so. Once I've passed the halfway point with the painting of a unit, I find that the early enthusiasm kicks back in. Plus I want to start on the regiment of RSM95 grenadiers. Charge!!!

Almost forgot to mention that I discovered a site today where one can create and download a PDF of square graph paper, hex sheets, and a number of other types of grids . It occurred to me that this might have all kinds of campaign uses. Visit:

I printed a single sheet og 0.5 cm hexagons on a piece of heavy white stationary, so the inks wouldn't run, and then superimposed my campaign area map on top of the grid. It looks pretty good. My plan is to make each hex about 10-12 miles across (the average daily march rate, I think) for 18th century armies. This will make the calculation of move distances much easier without making the campaign area too vast. After all, we must keep Stollen, Zichenau, et al inconspiculously sandwiched between extreme eastern Prussia, Courland, Livland, Poland, and Russia!

Mr. Fox said…
Wow that hex paper generator is great!!!! I'll have some printed out and start drawing in no time...

marinergrim said…
I want to sit and paint too. I have a resl bug (my wife says withdrawl symptoms) because I've not painted anything for two days now.
2:05 AM