Trees and Base Coating Woes of the Past 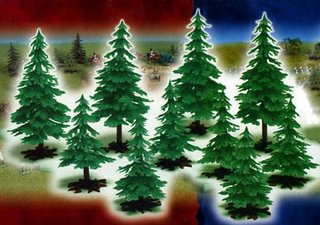 At right are the Zvezda trees (Item #8222 -- at $12.99US per set) I mentioned in yesterday's post. They are available from the Michigan Toy Soldier Company at:

http://www.michtoy.com. Very pleasant guys, equally rapid service. I've ordered several things from them in the last six months or so and have been highly satisified. MTSC did not have the trees in stock when I called in early December, but they ordered two boxes and had them at my front door in about two weeks. Best of all, MTSC has a huge range of 1/72 plastic figures in stock. Try them out if you haven't already done so.

Ah, spray basecoating. Why something that sounds so simple in theory should have presented me with such difficuties is anyone's guess! A few times in the late 80s, I tried spraying a base coat onto Late-Napoleonic Prussians one time and some French on another. In the first case, I used a can of Testor's mid-grey paint. Fairly good coverage after about four passes, but not entirely complete. In particular, if I recall correctly, the areas between arms and body as well as crevasses between backpacks and bodies, etc. did not get covered either. So, I still had to examine each figure later and make any necessary touch-ups with a brush full of grey paint.

Krylon black spraypaint was marginally better in coverage, but obscured detail on the figures. A particular problem when working with 15mm MiniFigs! This was actually my first experiment with spray basecoating in the Spring of 1984 as a 17 year old, long-haired, heavy metal rocker. I think Iron Maiden's Run to the Hills provided the soundtrack for that little basecoating experiment! Or maybe it was a song by the Scorpions?

Anyway, in the early 90s, I tried again. This time, I used a can of Armory white base coat. I made a point on following the directions on the can to the letter too since I fully remembered the disappointing results of the first two attempts. Yet again, results were not stellar. The same sorts of problems came up -- incomplete coverage on the figures in a number of areas that had to be touched up individually. So, back to the brush and white enamel paint for a basecoat! :-(

The moral of the story? Well, there are apparently lots of figure painters out there who regularly and happily use sprays for their base coats -- with good results. For me, it's just less frustrating and less time consuming in the end, to apply my base -- whatever it happens to be -- with a large brush. Sigh.

Bluebear Jeff said…
Am I correct in presuming that each box has ten trees (4 tall and 6 small)?

How tall are these trees?

Each box contains enough parts for 12 trees of various sizes if memory serves me correctly. They measure about 3-6" when assembled. All of the parts snap together fairly easily, but some might need a tiny bit of trimming with a sharp X-acto knife to fit together more easily. I think you might like them.

Anonymous said…
Spray painting will never give complete coverage and always needs to be touched up with a brush. If you read any of the "Eavy Metal" painting guides from GW where they start with black primer they always say "and fill in the gaps with iluted chaos black".
For me spary undercoating works well with scenery (walls, floors etc where it is a flat surface). Otherwise if I have to use a brush anyway to fill in the gaps.....
2:04 AM

From your response I have a part of an answer to why I have stuck with sprays. I too have had very poor results with any of the 'official' hobby stuff from Games Workshop or Testors. In fact during the 80's I thought that so many of the models I saw looked like bad cartoons that I NEVER painted any of the fantasy minis I had, as I did not like the results I saw coming from anybody else.

Then in the late 90's I got to see some pro results. I must have totally ticked off the artists as I plugged away with questions about everything with the three winners 1, 2 & 3.

First up, if I want a good result from a mini with spray base (all I ever do now) I will only use Floquil, and for the military units, BLACK and only BLACK.

If I have less concern about the final results, I can go to Armory, but their paints are meant for base coats that a bigger polymer latex paint or oil based paints to 'stick' to. Therefore the results may also be less than stellar.

I will be interested to read how well your gesso experiment works out, as I had always been taught that the gessos need to have a slightly porus surface to start with (like canvas) so the plastic may have a different response.

Anonymous said…
Yep, I have the same problems with GW black undercoat spray, but I assume that's just the nature of spray undercoating. I always have to get the brush out afterwards to ensure a complete coverage. I still think it saves time than doing each from scratch with a brush though.

Anonymous said…
You know, I love the fact that after all these years you are still into all this as you were when we were teenagers. I am certain your knowledge and techniques have expanded but your enthusiasm remains. You are a testament to a lifelong passion. Very cool, big brother!
Marnie
www.crescendophoto.com
4:00 PM

Anonymous said…
Nice trees - I've ordered some; these remind of trees that used to be made by Merit, they did poplar trees, fire tress and some others as well.

Zvezda, eh? I have to get some!