Squadron A and Regimental Staff in Progress 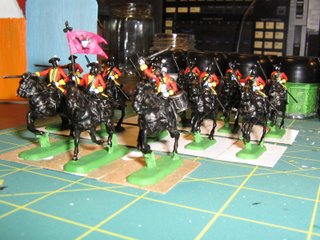 Ok men, here you go -- Introducing the 4th (Trakehnen) Dragoons! In the interest of time, I'm working only on the first squadron of nine figures plus the three figure regimental staff right now. I'll paint the reamining two squadrons to completion one at a time when I have finished with the first 12 figures.

Three evenings ago, I painted the figure bases you see in the photo, using GW's wonderful Goblin Green. The white "powdered" wigs on all personnel were also done that same night.

Last evening, I spent about three hourse doing the red coats, bright yellow facings and turnbacks, white gloves, and light blue wasitcoats (difficult to see here). Oh, and the light crimson/lavender guidon with its black double-headed eagle and light blue coat of arms. Tonight, it's faces for the men and bright yellow on the collars.

This weekend, it's on to painting reddish-brown horses with black manes and tails (what's called in equestrian terminology "Bright Bays") and dapple grey horses for the regimental colonel Manfred Von Cranz and the captain of Squadron A.

Initially, I decided to paint these fellows a medium or light shade of blue as their predominant uniform color. Jeff Huddelson and I discussed the matter at some length in October or November of last year. However, Paul Robinson's recently finished red-coated French cavalry, pictured over on his blog, appealed to my flashier side. So, you see the end result. Since I like bright colors, I decided on red coats with yellow facings and turnbacks. The light blue waistcoats just seemd like they'd work well with the two previous colors. I actually didn't decide to add that little detail until about 11:30 last night!

The other reason I went with red is that I already have the 2nd (Von Laurenz) Musketeers painted in dark blue coats and I intend to clothe my RSM 95 grenadiers in light blue coats after I finish the dragoons. So, red seemed like a perfectly nice alternative. And I've always liked those red-coated Irish troops pictured on the back of Charge! Phil Olley's regiment of red-coated infantry, involved in the refight of Sittangbad last year, has also stirred my sense of pomp and color.

Now, it's said in Stollen that the 4th (Trakehnen) Dragoons are one of the most fashionable regiments in Stollen's army at the moment. Men and women alike appreciate the unit's smart uniforms and steadfast mounts. Many young men of Stollen's small aristocracy and landed gentry clamor to enter the regiment via purchase of a commission or family connection. While numerous young Stollenian women of an appropriate social standing wish to land a young officer of the regiment as a beau and eventual husband. Still others, men and women both, would like to see Colonel Von Cranz's head topple into a wicker basket.

The generally held view of him is that Von Cranz is an unapologetic cad and a pathological cheat at cards. Frequently, he can be found at his favorite haunt -- the tavern Der Traurige Krabbe (The Sad Crab) -- in the company of other equally arrogant young officers from various Stollenian regiments, gambling, duelling, and womanizing until the wee hours. Rumor has it that Von Cranz has promised to bring his current paramour the heart of the Elector of Zichenau after defeating Zichenau's army in but one battle. Will he make good with his audacious promise? Only time will tell.