I'm the ghost of BUA's yet to come! 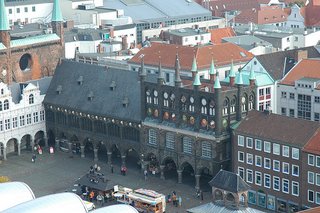 Much like Greg Horne over at The Duchy of Alzheim, I too have been developing urban real estate for use in my imaginary campaigns over the last couple if days. So far, I‘ve built three houses, a warehouse, a large town hall, and a church, of which I am especially proud. Should have some photos of the basic structures in the next few days, but I can tell you now that everything turned out rather well.

Each building has steeply gabled ends along with those “gingerbready” Dutch/North German flourishes. I added steps to the entrances of 2-3 of the houses and the town hall. The latter is large with an arcade and arches down one side. The church tower turned out pretty well too. And oddly, given the many different complimentary angles involved, the roof on the bell tower doesn’t look too bad either.

This week, amongst all of the other necessary and/or fun things to do, I’ll build the “ruined” bases to place inside each structure along with some kind of bridge. And then there is the painting of the buildings – But I’ve got to get back to that regiment of dragoons sitting over on the painting/radio table too. So much to do in so little time! What shall we do Ebenezer?

Anonymous said…
Plenty to keep you happy over the festive season then Stokes!
2:27 AM