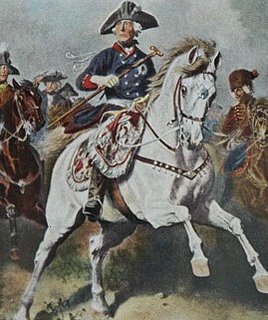 Thank you very much to everyone who has visited The Grand Duchy of Stollen 1768 blog!!! We’re now up over the 2500 mark, and it’s amazing how quickly this has happened in the last few weeks. Wow!

Yesterday, I finished the painting touch-ups on the two guns for the artillery battery belonging to Stollen. I also hit the artillery crew with their coat of Future floor finish, and the guns await the same treatment over on the painting/radio desk right now. Photos will follow here in just a few days. Stay tuned!

Best of all, I began the painting work on my two mounted generals and their aide de camp. These three figures will represent the Grand Duke Irwin-Amadeus II, who will resemble the Great, and his second in command General Von Maur. Their hussar aid will be Captain Rudolf-Michael von Schenker, who already has a lime green bag atop his brown busby. I’m going to enjoy working on these three figures later this afternoon!