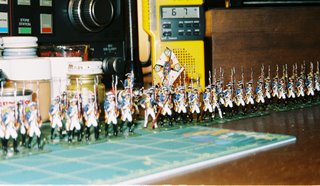 Well, it seems that The Grand Duchy has been visited more than 2000 times. In fact, there have been about 400 hits in the last two days alone! Not bad for an imaginary place. It's amazing what a few interesting photos will do to swell the number of visits to a blog!

I imagine that Grand Duke Irwin-Amadeus II is puffing an extra big cigar this morning. In honor of such a terrific milestone, here's one more photo of the 2nd (Von Laurenz) Musketeers. Oh, and it seems that Colonel Von Laurenz called off his duel with the commander of the Jaeger zu Fuss at the last minute the other day. Something about bad nerves. . .

On the painting front, Stollen's battery of artillery is about done. Just the brass sword pommels and scabbard tips remain on the crew and I'm almost finished paiting the wooden gun carraiges red, taking care to leave the black metal parts unpainted. Then it's brass barrels and a coat of Future floor finish. Should be able to wrap 'em up this weekend! Next, it's on to the staff of three, a regiment of 30 dragoons, and a few conversions, attaching Prussian heads to Napoleonic Saxon cuirassier bodies. Should keep me busy into January.

Best of all, we have a major winter storm approaching Central Illinois, just in time for December 1st, calling for 7-10" in our area of the state with around 15" in the Chicago area. Needless to say, our cross country skis stand at attention by the front door in anticipation. As Mike Myers's character "Dieter" from the ficticious German TV show Sprockets used to say, "I'm as happy as a little girl!"

Anonymous said…
Okay, Dieter!!! I love that you posted photos of your work. It really does help to conceptualize just how much work goes into each 'man'. Well done!
11:38 PM

Bluebear Jeff said…
We're not just "snowed in", but we have burst pipes as well. No hot water and my bride is NOT HAPPY.