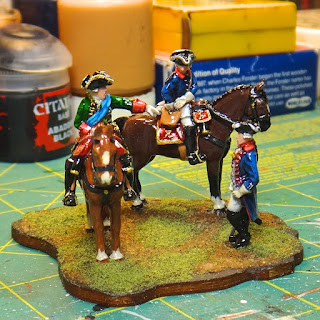 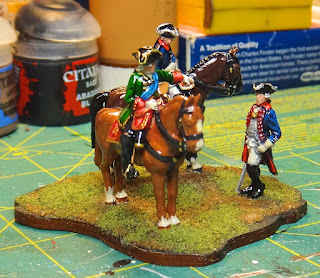 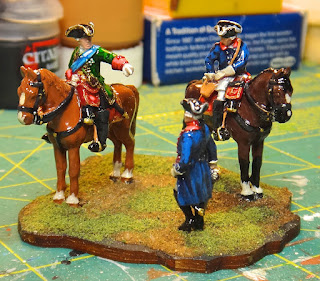 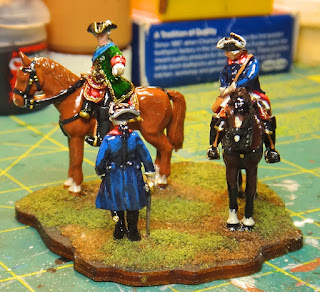 And just in time, since Birthday #12 is just three days away.  I give you General Paul von Stollen ab und zu Hasenpfeffer!

As explained in my previous post, the combination of a Russian general with Prussian officers is unorthodox, but von Stollen (in Russian green) is of Baltic German extraction and currently in the service of The Grand Duchy of Stollen (in Prussian blue).  An inveterate trickster, he thumbs his nose at the czar in nearby Saint Petersburg by continuing to wear his Russian uniform.

This was an especially fun vignette to paint!  Three coats of gloss yesterday and the groundwork last night after the Young Master's bedtime.  However, I was in such a hurry to take, edit, and share photographs here that I neglected to take a large, soft brush to brush off stray bits of the Woodland Scenics turf material from the figures.

As always, I have spotted a few tiny areas, looking at the photos, that need some final touch-ups.  But that will take only a few moments, then we're done, and Bob's your uncle.

Next up, a two-gun battery of Russian artillery for Young Master Paul's Christmas gift.

Ross Mac rmacfa@gmail.com said…
A fine gift of the sort that gets cherished for decades.
10:58 AM

Wellington Man said…
Just beautiful, Stokes. That's got to be the most gorgeous green ever!
Best regards
WM
12:44 PM

Heinz-Ulrich von Boffke said…
Thank you for your very kind words, gentlemen! I hope young Paul will like and enjoy it.

David said…
Very nice indeed! Do let us know how your son reacts; it's a wonderfuly personal gift and I can't imagine him not being thrilled by it. :-)

Chris Gregg said…
They look great Stokes, and allowing ourselves indulgences, especially with staff officer uniforms, is a lot of what18th Century Imagi-nations is all about.
Chris
http://notjustoldschool.blogspot.com/
5:56 PM

Alister Sharman said…
If it would interest you i have a copy of a very detailed picture in colour of the Duke of Schaumburg -Lippe in Uniform during the Seven Years war. if so i could email you a copy
6:30 PM