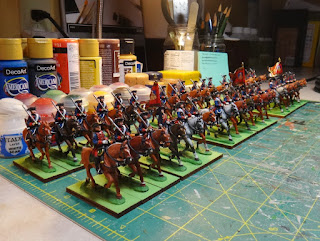 The initial 36 Minden Austrian dragoons, painted more or less as three squadrons of the Batthyanyi Regiment, receive their squadron guidons.  Six horse grenadiers and three regimental staff wait in the queue to join them eventually.

You could almost hear a pin drop the last few weeks here at The Grand Duchy of Stollen.  As is very likely the case for many right now, there has simply been too much additional stuff going on even though many of us are still effectively at home all of the time.  Not much time for toy soldiering sadly.

Teaching online takes more time than you might think, and it just is not the same thing.  Sigh.  Working from home was fun for a couple of months last spring, but I really miss my usual routine five days a week of journeying into campus, teaching face to face, meeting face to face with colleagues, and the like.  Not to mention my usual early morning coffee at the cafe in one corner of our main library before anyone else was around.  Extreme Zoom and MS Teams fatigue here!

The Young Master has had considerable difficulty with school online and has been reduced to tears a few time because of it.  Despite some learning disabilities and social challenges, he enjoys his teachers' and classmates' company, and he would much rather be in school actually with them all things being equal.  Paul said as much to me two or three weeks ago as I tried to console him during one of these episodes, but it was difficult.  A very steep learning curve for him and all of his classmates this year.  There has been some talk of the school district moving to a hybrid approach before long, two days online and two days physically at school, but given the rapid rise of Covid-19 cases across the U.S. in the last several weeks, I wouldn't count on it.

But, today is Saturday, and I managed to get my you-know-what into the painting chair for an hour or so a little while ago.  Things went faster than expected, and I applied the final touch-ups to all of these Austrian dragoons, carefully attaching the three guidons to the right hands of the guidon bearers before ending the session.  They look pretty good if you'll pardon my saying so.

Just two coats of acrylic gloss now, and we'll be able to consider them all finished.  Then, it will be on to the final nine horses and figures for this particular unit, a company of horse grenadiers in bearkskin bonnets and three regimental staff, including a French trumpeter in fancy dress, who has been pressed into service.  All told, the regiment will muster 45 horses and figures when everything is finished.

On a non-toy soldier note, I have managed to shed 10 pounds in the last four weeks by walking almost everyday for an hour and limiting my calorie intake per day to 1800, less if I have been able, which is what the two online calorie counters I've consulted recommend for a guy 5' 11" tall and almost four years on the wrong side of 50.  It means, of course, that I must eat like a bird since actual serving sizes are minuscule at best.  But I weighed in at 175.0 pounds this morning.  Ten more to go to reach my target of 165lbs., which was my weight when I met and began wooing The Grand Duchess 20 years ago.

We shared an office as graduate teaching assistants in Folwell Hall at The University of Minnesota, and by Thanksgiving in late November, I had fallen like a ton of bricks although it was several months before I summoned the courage to tell Sonja what I felt.  To borrow a George Costanza line from Seinfeld, "I see beautiful things and. . .  must have them."

Where in the world does the time go though?

Matt said…
A fine looking unit you have created.

I wish the Young Master well as we adapt to the new normal (and I am sure the canteen coffee will taste all the better).
5:05 PM

Fitz-Badger said…
Excellent (and large!) unit as usual! The quality and quantity always amazes me.

tradgardmastare said…
Strange days indeed. When I retired from teaching I volunteered for a day in the school I retired from once or twice a week . I really enjoyed the teaching without the admin/ paperwork not to mention interactions with former colleagues and helping new ones. That has gone and I really miss it.
I hope the young master adjusts to the new norm overtime with support.
Great unit of figures, I applaud your single mindedness and effort, terrific.
Well done on the weight battle won. I walk more but eat more. I need to sort one of these out...
Stay say
Alan

Wellington Man said…
Your troopers are looking seriously good, Stokes, and indeed serious all round in their subdued lighting. They fit the times.

This year has been terribly sad and disorientating in so many ways. There'll be better times ahead, however, I have no doubt. We've just seen a tiny flash of this in NZ. I hope and trust this spirit will spread. People know in their hearts what needs to be done, and it'll show up in the polls soon enough!

The Good Soldier Svjek said…
I've had to loose weight to control my type 2 diabetes , the problem I have found is keeping it off once having lost it , but loosing it has been great - feel fitter than I have done for years - good luck keep it up , Tony
3:44 AM

Rob Young said…
Know how you feel. Spent most of yesterday afternoon sorting out work for a new remote teaching student... had wanted the time to be spent casting figures... and my weight seems to be slowly on the way back up (meds not working?)... fun times.
3:49 AM

I'm interested to hear that all your teaching is still on line as the impression we get from the media is that all Americans are rushing around hugging and kissing each other! Glad there is actually some common sense as there's not a lot of it here in the Old World.
5:49 AM

Ross Mac rmacfa@gmail.com said…
Well done on the painting and on the years with the Duchess (bold heart etc) and best wishes for your son to come through all this.
1:40 PM

marinergrim said…
Excellent unit Stokes. On the plus side - unlike many of us painting and creating new units, yours won't have far to go to actually see a wargames tabletop and may actually get a game.
The young will adapt. They always do. Far more quickly then those of us who know that this can't go on like this forever (can it?). In the meantime he has family around him to support his development.
2:25 AM

A highly interesting title on the v…
7 comments
Read more