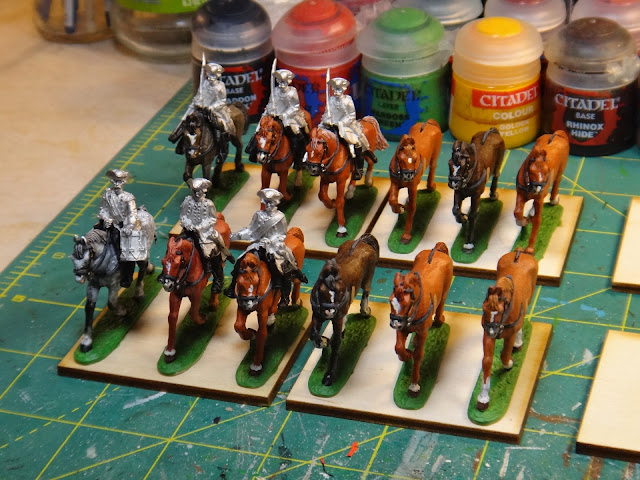 The 36 Minden horses have been peeled from their temporary cardboard painting bases, and I'm now carefully checking the fit of everything on the permanent Litko 3mm ply bases which measure 60mm across, by 50mm deep.
A little quiet time to myself this afternoon here in Zum Stollenkeller.  And what better way to spend it than by sitting down to the painting table for some more work on those 36 Minden Austrian dragoons?  Since the horses are all done, it seemed like a good idea to fix them to their permanent bases, which was accomplished in fairly short order.
I'll leave painting the green onto them until the riders are all finished and everything has been glossed.  Previous experience demonstrates that even with careful handling of the green permanent bases, considerable touching up is necessary post-glossing.  So, I've decided this time to leave that -- painting the wooden ply bases with Citadel Warboss Green to match the bases of the horses that is -- until the very last step in a few weeks' time.
Now, the eagle-eyed among you will have noticed the rather unorthodox approach of treating the dragoons themselves as a separate though related painting project.  As yet, they have not been glued in place atop their mounts.  Were I to do this over again, I'd revert to my old method of fixing the figures to their horses before basecoating and any painting at all commence.  Ah, well.  It seemed like a good idea at the time.  As it is, I'll need to basecoat and paint the dragoons very carefully to avoid slopping any white gesso base coat or subsequent paint onto the finished horses.  Live and learn as the saying goes.
The Grand Duchy of Stollen blog is, it seems, turning into a repository of painting don'ts.  We'll see how things progress.  In the meantime, I'll open a new tube of super glue gel this evening and attach said riders to their patient steeds, Grand Duchess, Young Master, or work from home permitting of course.
Incidentally, I think an additional six dragoons, to form a third rank, along with a resplendently uniformed colonel and trumpeter for the regiment might be in order in September once these have been glossed.  Come to think of it, I could move six of the current batch into the supernumerary third rank and purchase six Austrian dragoons in the grenadier bonnet, to form an elite company in the first squadron.
Along those lines, I've just managed to scare up a mounted Austrian infantry colonel, a French trumpeter, and two additional walking horses in the spares drawer, all of which can be pressed into service, through judicious paint conversions, for this eventual monster cavalry regiment without too much trouble.  As I've related before recently, The Grand Duchess kids me often about my tendency never to do anything halfway.  The late, great Peter Gilder never did.  And especially when it comes to cavalry, why should we?
-- Stokes 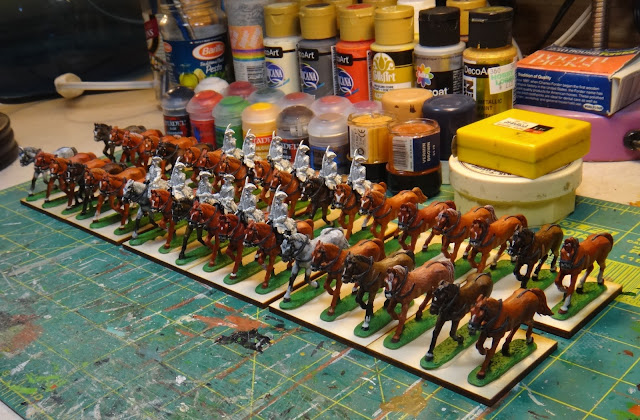 And a bit later, here are the mounts for the three squadrons all tacked down with Elmer's Wood Glue, which has been my preferred adhesive for many, many years now.  Primarily because it was what I "procured" from my late maternal grandfather's basement workshop back in those heady days of the early or mid-1980s when the teen-aged me painted those first 15mm Napoleonic units and affixed them to card bases to the accompaniment of Iron Maiden, Judas Priest, The Scorpions, and others via Philadelphia rock radio stations 93.3 WMMR and 94.1 WYSP.

I utterly understand your nostalgia and admiration for the likes of Peter Guilder. Your comments are motivating me to develop my Seven Years War collection to the big battalion level, with my already existing old school basing such evolutions of regimental formations are made easily, of course given time.

Heinz-Ulrich von Boffke said…
Thank you for your kind comment, Burgoyne! As the saying goes, "Go big, or go home!" This is the largest cavalry formation I've ever tackled in one go. A pet project of sorts.

tradgardmastare said…
These have come along really well. I like the reference to your grandfather. My father was no diy fellow at all but I enjoy using some of the items he had and are still around.
1:40 AM

Ross Mac rmacfa@gmail.com said…
Ah such patience and perseverance! ( he wrote with a discrete shudder at the thought.. )

One traditional solution to painting the riders separately was to drill a hole in well, a delicate part of the rider and mount him on a round toothpick or similar or a nail to use as a handle while painting.
6:23 AM