Stollenian grenadiers and dragoons in support of mainline during Elbow River refight, July 2013. 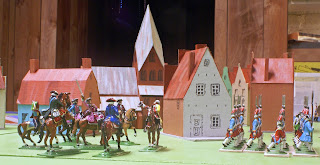 Stollenian command and grenadiers just outside New Sittangbad during the Sittangbad refight, which culminated prematurely in a bad case of, if memory serves, felinus interruptus.

Part of the Stollenian frontline during the July 2013 refight of Elbow River. 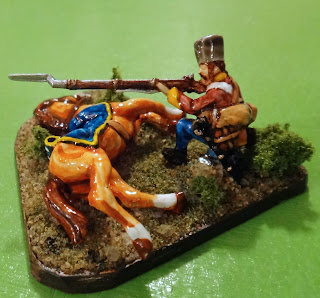 Photoshop, or even versions of Photoshop Elements, is invaluable for brightening, sharpening, fixing color cast, and cropping photographs of my models and game setups.  Learning the rudiments means that my photos the last couple of years have been a far cry from early efforts to display my figures way back in 2006-2007.  Of course, using a tripod, camera timer, and a home-made white foamcore lightbox can yield even better results.  In short photographing your units and armies is an absorbing hobby in its own right.