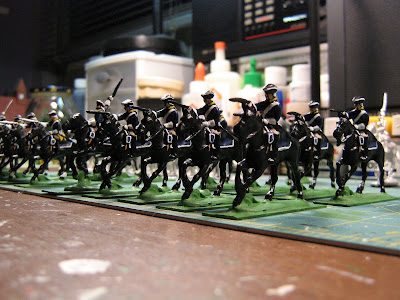 Many thanks to those of you who have sent your congratulations about the new house! The Grand Duchess and I are currently up to our eyeballs in various pre-closing details, like setting up house inspections, roof inspections, radon gas tests and the like. Gosh, the movies make it look so easy kids! Still, it’s a terribly exciting period in our lives, and although these things have taken lots of time the last several days, there has still been some room for some steady painting in the evenings.

I’ve also heard from Randy Frye in about the chance of a July or August game with him, Bill Protz, and Jim “Alte Fritz” Perky. Although the game will likely take place at Randy’s home, the possibly might also exist to inaugurate my own future wargaming room/table, which I have yet to christen with some kind of simultaneously silly, and yet clever name. Wouldn’t that be something?

Sonja and I were bouncing ideas around a few nights ago after dinner. She didn’t care for the obvious Winston Churchill inspired War (Game) Room, so for now the future sight of battles between Stollen, Zichenau, and their tiny allied principalities on the northeastern end of Fredrick’s post-SYW has a more Germanic twist to it – Das Zinnfigurenzimmer! It’s a mouthful if one pronounces the z’s in the correct German accent (as a “ts”).

I’m not wedded to this idea though as it leaves out my plastics, which make up the bulk of my forces. We’ll see, but it’s too bad that Henry Hyde has already used “Loftwaffe” for himself, but then I won’t be in the attic either. As my grandfather might have joked after a couple of scotch and waters, however, “I’ve been in the basement all my life!” So, maybe something like Die Kriegspielkeller is more in order? Well, there’s plenty of time to work out all that!

Anyway. . . In the above photo from last night, you will see the middle batch of Spencer Smith cavalry in front of the initially completed squadron to the rear. I’ve completed everything except the yellow coat tail turnbacks and officer’s folded back lapels, the metallics (swords/scabbard tips and related details) and the white horse markings on muzzles and legs.

I was actually up very early today (3AM) since I could not sleep anymore. I took the opportunity to do a little painting over coffee while the BBC World Service online played in the background. Thus fortified against the early morning chill, I worked on five figures’ yellow turnbacks. I also went back and fixed some ill-defined areas on the first twelve figures with careful black lining (not visible here). If things go according to plan, I should be able to wrap up painting on this batch either Saturday or Sunday this weekend. Then, after a night or two off, it’s back to work on the third and final batch of figures for the regiment, a squadron of which fought for the Electorate of Zichenau in last month’s Action at Zollamtstadt.

Finally, the unnamed “wargaming project” is coming along slowly but surely. I have more or less decided on what information to include. A few of the pieces – I hesitate to call them chapters just yet – have been written already, but much remains to be developed more fully. I’ve also managed to compile a list of US and hobby publishers to query. So, that’s where we stand at the moment with that.

Thank you again to everyone who took the time to send me thoughts about one or another of the questions that I asked in an earlier post. Now I’ve got a few (?) more. I’ve examined my various Christopher Duffy titles for information on how battles were fought more or less during the mid-18th century. But Professor Duffy sheds little light on earlier conflicts of that same 100-year period.

With that conundrum in mind, might some of you Stollen regulars be able to shed some light on how tactics differed in, say during the Great Northern War or War of Spanish Succession? I do know that pikes were still used early in the former, and infantry/cavalry formations were generally deeper than they became later, but is there anything else to it? What about the War of Austrian Succession? I’d sure appreciate it if some of you could provide some fairly concise guidance on the matter or refer me to specific books, please.

Ok, this post has grown long enough. Back to work!

Belated congratulations on the new house! :-)

On the WSS, David Chandler did 2 books which you might find useful; "Marlborough as Military Commander" and (not absolutely sure of the exact title as it's not to hand) but something like "The Art of War in the Age of Marlborough".

To me the most obvious name for your gaming room would be. . . . the "Stollenkeller".

Also, did I miss the recipe you promised to post?

After all, you wouldn't want to find yourself in the keller, would you . . . unless of course you had some of the Grand Duchess' stollen . . . then the Stollenkeller would be a great place to be.

and compare with WSS info.

abdul666 said…
'Tin Flats'? They look *great* in a display case (though, I've been told, harder to paint than 3D minis), but on a battle tabletop, where youu cannot but see them from 360°....
Would require a *huge* additional dose of ''willing suspension of disbelief' (like those bad semi-professional movies where the scriptgirl, the perchman and the director's car periodically appear in a corner of the screen)...

tradgardmastare said…
Cavalry coming on well- excellent work.Housing buying is both fraught and exciting in equal measure.
Still waiting my Holger Erickson samples - would like to get started soon....
What about the following name for the wargames room - Heimat.
2:24 PM

MurdocK said…
Looks like your brushes are getting a good workout!

I know very little about the tactics of the period, though I did find both of Chandler's books very interesting. I would also recommend "The Anatomy of Victory: Battle Tactics, 1689-1763" by Brent Nosworthy. I haven't read it, but I have read his other two books on tactics, "Battle Tactics of Napoleon & His Enemies" and "The Bloody Crucible of Courage: Fighting Methods and Combat Experience of the Civil War" superb. Some of the best military history I've ever read. I can only assume Anatomy is as good.
7:14 PM

Congrats on the house! It will be hard work, but well worth it for you and the Grand Duchess. I would suggest paying tribute to one of your favorite Liverpool bands and recognizing the underground environment with "Der Höhlenklub". If not, then I would second the "Stollenkeller".

As to the WSS/GNW (and earlier), I would heartly recommend David Chandler's "Art of War...". I once helped co-author a set of campaign rules for this period and found that book to be invaluable. I can also recommend C.S. Grant's Wargames Research Group publication, "From Pike to Shot" if you can find a copy without paying a premium. Charles gives very good synapses of the major battles of the period, the army orginizations, tactics, etc., all written in his enjoyable style.

Steve-the-Wargamer said…
Stokes - my understanding is that the Charles Grant volume Bill mentions has been reprinted(their are two) by Caliver - updated/revised etc. but I think they're the same book... I also put in my votes for the two Chandler volumes - absolutely crucial to my WSS project...

Your question on difference is a good one, and recently asked on Jeff's Bluebear site (hos post on a new project has the comments) - some good feedback their from GrimsbyMariner on the key differences between WSS and later wars....
7:02 AM

Steve-the-Wargamer said…
PS. Just been reading Murdocks blog and he has a link to a brilliant article showing the diffrence between WSS and SYW...