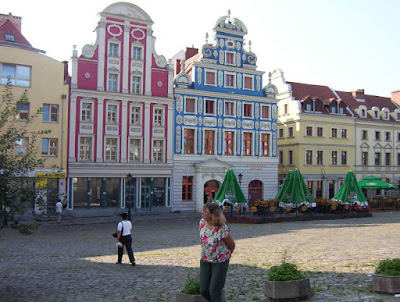 A modern photo of two old merchants' houses in Szeczcin (German: Stettin), on the .

Background and Rationale
When I began down to road that led to the Grand Duchy of Stollen, my fictitious mid-18th century campaign, I decided that I wanted to construct buildings unlike any I could find commercially. Another influence on my decision to build miniature houses from scratch was the charming impressionistic style of those old, hand-made balsa wood houses that Charles Grant used in his battles all those years ago. We’ve all seen these in various photos from The War Game and other books authored by Mr. Grant. Charles Stewart Grant’s Table Top Teaser articles in Battlegames, and the recent refight of Mollwitz (in which Brigadier Grant participated), have also featured these now very familiar vintage pieces.

Needless to say, I wanted something similar, but with a more distinct northern German/Baltic “look”, to fit my particular campaign setting and narrative. Since I have always produced most of the scenery I use for wargaming, it seemed perfectly reasonable to try my hand at modeling houses and other assorted buildings in this old school "Grantian" style.

The Grand Duchy of Stollen and its arch enemy the Electorate of Zichenau are located somewhere to the extreme northeast of , not far from the . With this idea in mind, I determined that whimsical buildings based on the North German/Flemish Gothic architectural style -- still found across Northern Europe from places like Antwerp, Brugges, and Bremen clear across the continent to Gdansk, Riga, and Tallin -- were necessary to impart a particular Baltic flavor and feel to my games.

The houses and other buildings in this style are relics of the eastern crusades by the Teutonic Knights and, a little later, the dominance of trade in the region by the German Hansa. Once the Flemish merchants began to overtake the Germans in the same geographic area, they too left their architectural stamp across . Even today, it’s possible to find old churches and houses in tiny Polish and Lithuanian villages that serve as reminders of the centuries of German presence in these areas prior to the upheavals of 1939-45!

In the next posting, I'll discuss reference materials and the materials I used for producing my collection of custom-made buildings.

tradgardmastare said…
Stokes
interesting discussion/info on the buildings - I can't wait for the how to part. My daughters have expressed an interest to try and build some buildings for me . They (like me ) think your buildings are great....
best wishes
Alan
2:41 PM

Fitz-Badger said…
Ah, now I see the other side of where you buildings "come from" (the first side being the old school Grant buildings).
I, too, am looking forward to further info on your buildings.
9:16 PM

Bluebear Jeff said…
Yes, Stokes, your buildings are lovely and different . . . yet in a style that fits both the period and area quite well.