Company B of the Leib Grenadiers is DONE!!! 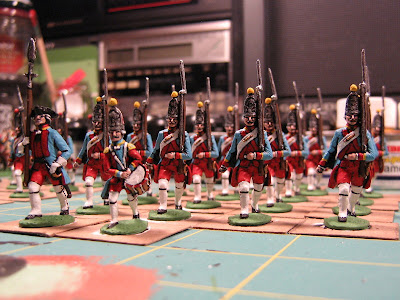 After a marathon session this evening to finish the few remaining details – it’s now after 2AM -- and barring a few minor touch-ups plus the officer's sash and gorget tomorrow, Company B of Stollen’s Leib (The Grand Duchess Sonja’s Own) Grenadiers is finished! And it took just two weeks of painting a few few hours most evenings, but certainly not every night either.

If I can keep up this same momentum, I should be able to have the entire regiment all painted and ready for its coat of Future floor polish just after June 1st. Then, it's time to start trimming flash from that 80+ figure unit of Revell Austrian grenadiers, whose photo was posted here a while back following that survey in which some of you regular Grand Duchy of Stollen visitors participated. That unit will be the first infantry unit painted for the Electorate of Zichenau's army. These figures are soaking in vinegar right now in fact. 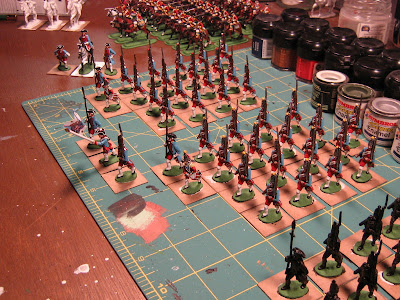 And here are companies A and B lined up behind their regimental colour as Colonel Emil von Spasticus and his adjutants look on. You’ll also notice in the second shot that I’ve painted the bases of Company C green already. Can't lose my paintin' mojo now -- Yeah, baby!!! 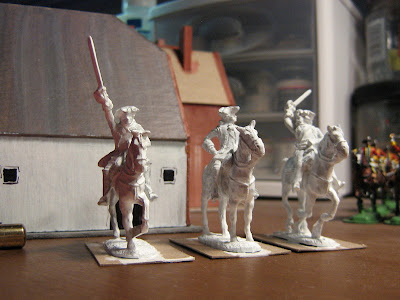 Finally, in the third photo at bottom, are the three newly base coated RSM figures, ordered as samples more than a year ago, which will represent the Electorate of Zichenau’s first generals. In the center is the depressive French mercenary, who also considers himself a great, brooding intellectual, the notorious General Phillip de Latté. To his left is the commander of Zichenau’s cavalry arm, Gen. Quintus Albertus Supercilius von Lickschpittel. On General Latté’s right is the commander of his infantry arm, General Anders Gedacht von Glühwein, who is frequently more interested in the grape than in the well-being of his troops. More on these three gentlemen's personalities anon.

I’m not yet sure about the uniforms for the other two, but Phillip de Latté will wear a French/Austrian derived uniform in white, as is only proper given his Gallic origins. oh, and I will remove the molded pieces of metal connecting the legs two of the horses to their bases before touching up the gesso base coat and adding the black undercoat sometime later in the week when I take a pause from Company C of the RSM grenadiers.

Last of all (I promise), the tourist count for the Grand Duchy of Stollen has recently surpassed 9100 in number since last August. At that rate, Carnival Cruise Lines or Cunard representative should be contacting Stollen's board of tourism soon, to arrange for future visits by some of their more ocean worthy ships. Except that Stollen is landlocked and the draft of modern ships prevents them from sailing up the Great Zwischen river to dock at Krankenstadt! And now, to bed. . .

What technique do you use to pick out the front plates of the grenadier caps, by the way?
11:49 AM

Poruchik said…
Stokes, Very nice work! So the three cavalry gentlemen, what RSM parts are they?

I use a fairly small brush and just kind of "wiggle" it around, making a series of "squiggles", dots, and dashes. . . all the while leaving some of the black undercoat showing through. At arms length, this fools the eye into thinking that there is embossed detail on the front of the grenadier spas when there really isn't. Try it.