A Better Shot of RSM Grenadiers Viewed from Behind 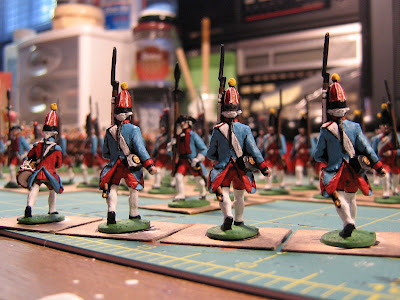 Here’s a better picture of those same "in-progress" RSM grenadiers, this time taken from behind. It occurred to me that few of us ever show photos of the rear side of our figures. So, this time I wanted to share my painting on the rear of the mitre caps with you – 19 figures and not a single mistake on the white lines, representing the whale bones used in real life to give rigidity to the colored cloth part of the mitre caps. Pardon my smug tone, but I usually make some kind of painful error when painting in thin lines, and there are always one or two figures that need some later touch-ups. Not this time. You'd never believe I was an unapologetic coffee junkie, would you? ;-)

You’ll also observe the brass badges on the black cartridge pouches and the brass tips on the short sword scabbards, hanging from the left hip of the figures. Drat!!! I see that I need to dab a bit of red around the drummer’s shoulder belt, to fill in a bit more of the black. But otherwise, I did a decent job on the white drum cords, red hoops, and the brass shell. I even managed to leave black lines showing between the white cords and brass shell for added emphasis. Funny how one’s skills sharpen over the years, isn’t it? And how proud I was of those first 15mm Napoleonic French figures by the firm Jacobite in early 1984!

Ok, enough chatter! It’s time to paint in the yellow lace that edges the collars and cuffs plus the frilly shirt cuffs that show at the wrists of these figures. Onwards and upwards, gents!

Bluebear Jeff said…
Oh, Drat! Now I have a decision to make . . . do I paint Saxe-Bearstein's drummers in alternate colors? or in the same coats as the rest of the unit?

Since they are not historical, it could be either . . . hmmmmm.

They are coming aling nicely now.

I wish my Leib Grenadier Garde was going as quickly!

Jeff -- reverse those colours! It makes a nice contrast with the rest of the unit.

Auston Jeff Butler said…
I like how you paint.
8:10 PM