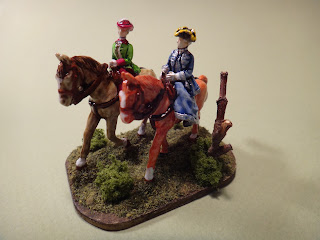 The Grand Duke's aunts, Irmgard in the green riding habit and Waltraud in the blue, younger sisters of the formidable Aunt Hildegard. . .  She of the yellow dress along with Uncle What's-His-Name and the large group of frolicking aristocrats in a previous post.  All three women are as ferocious as the gorgons, scheming, and eager to see their nephew marry and produce an heir to the throne of the Grand Duchy of Stollen.  But for the good graces of his faithful English manservant Hives, poor Irwin-Amdeus II doesn't stand a chance! 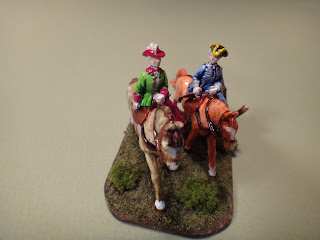 Rats!  I see that in my rush to gloss the figures and terrain their base, I neglected to add the silver and brass bits on the harnesses of the their horses.  No matter.  I'll take five minutes tomorrow afternoon and do it before movng on to the next batch of figures. 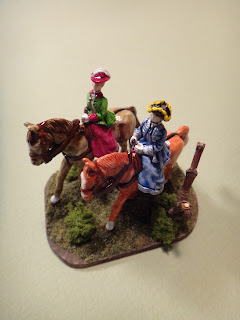 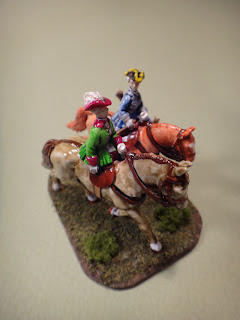 And finally, another view that highlights the white feathers atop Aunt Irmgard's hat.  I think this very same hat later made an appearance in the 1973 Blaxploition film classic Super Fly.

Conrad Kinch said…
Very impressive stuff Stokes. They are a credit to you.
8:48 PM

joppy said…
Good to see these redoubtable ladies in the flesh, so to speak. Experience shows that when the female side of the family get together any male in their line of sight stands no chance.
4:33 AM