Look who's been hard at work in the palace kitchens! 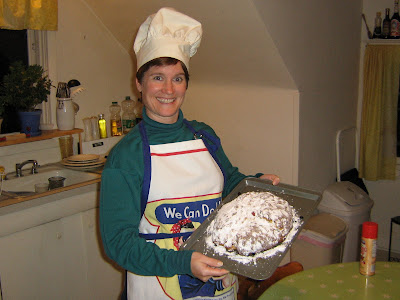 Yes, the Grand Duchess Sonja has been hard at work in the palace kitchens today, supervising this year’s batch of authentic Dresdner Stollen, to be dispatched to troops near and far in the coming weeks. I can assure you that it’s as good as it looks, and I’ll need to do some extra bicycling to stay trim during the coming Christmas season.

On a different note, Zichenau’s 80-figure Ermland Garde zu Fuß regiment is almost finished. The two steps remaining are the silver musket barrels/bayonets and the brass/bronze hoops that hold the musket barrels to the wooden stocks. Hopefully, by this time tomorrow they’ll be all done. Photos will follow right here. 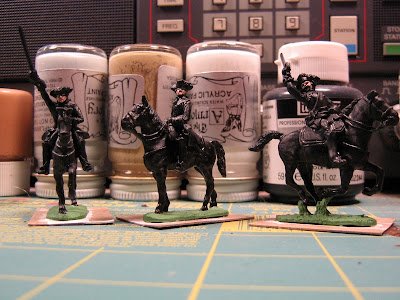 In the meantime, I finished undercoating, and painting the faces of the Zichenauer general staff. Gentlemen, meet Major Biscotti, General de Latté, and Colonel von Gherkin. The Major is on loan to Zichenau from the Venetian army, General de Latté is, as you know already, a mercenary-adventurer from , who is the sometimes lover of Zichenau’s Princess Antonia. Currently, though, he has been linked to Princess Valerie of Pillau-Zerbst as well. Finally, we have Colonel von Gherkin, from an obscure Austro-German family, known for their prolific cabbage farming.

Bluebear Jeff said…
The stollen looks delicious . . . you are a very lucky man to have the Grand Duchess in your kitchen.

tradgardmastare said…
My forebears hail from Germany - any chance of the Grand Duchess sharing her recipe with me ? I would be very pleased indeed.
Many thanks
11:12 AM

tradgardmastare said…
I await the general staff with bated breath and am sure they will look great painted!
11:28 AM