And Now the Dragoons Themselves. . . 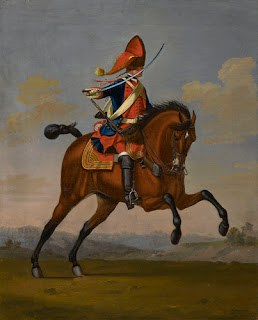 Yes, we've been here before.  But I am especially fond of this painting by David Morier (1705?-1770), which shows a grenadier of the Batthyani Dragoon Regiment with a few different details from those given elsewhere online.  I might give my own officers red breeches and saddle cloths.  You know.  Just to keep things interesting.
Well, things have been a little quiet here at Stollen Centrale the last few weeks.  Nothing virus-related, thank goodness, merely the usual intrusion of real life into normally free summer daytime and evening hours.  Lots of professional development this year in the form of two online courses all about. . .  Wait for it. . .  teaching courses online.  I am also going up for promotion in the fall, so there has been lots of time consuming activity gathering all of the materials into a portfolio and writing a teaching narrative, which has proven surprisingly difficult.  All of which is to say that there aren't enough hours in the day for the fun stuff.
But, I finally managed to finish highlighting the tack on those 36 Minden dragoon horses, and have set them safely to the side in a large plastic tub for the time being.  Two mischievous cats plus inquisitive small hands belonging to The Young Master, who has trouble with the concept of "Don't touch things that are not yours."  The dark gray highlight is a bit light up close, but at arm's length everything looks pretty good in my view.
Time now, though, to begin painting the 36 dragoons themselves.  I'm a bit behind schedule here since we are already steaming toward mid-July -- and things are rather unpleasantly steamy here in much of the United States at the moment -- but there we are.  And I'm faced with something of a temporary painting conundrum.  How in the world do I fix the 36 figures to some sort of temporary painting bases to get on with the base coating and so forth?
I recall now why I have more typically glued the troopers and officers to their horses first and addressed everything together with past cavalry units.  I've thought about using a dot of superglue gel on the underside of the saddle cloths to glue four or five figures each to unused pencils or lengths of wooden dowel pins in a manner similar to gluing several infantry figures to tongue depressors to facilitate assembly line painting.  I've also considered using tiny balls of that sticky blue poster tack -- the kind that is not supposed to leave greasy marks on walls but, in fact, does -- on the ends of large nails, all of which could be stuck into a large piece of styrofoam sheet to keep everything upright and safe between painting sessions.
Thus far, no dice.  Primarily because I have not ventured out yet to purchase superglue gel or that 3M blue poster tack from our local big box craft store.  I'm a bit stuck to be honest though since neither option seems terribly practical.  Any suggestions?
By the way, the planned uniform for the dragoons is that of the Batthyani Regiment, which, according to Kronoskaf, was primarily dark blue with red distinctions as was the saddle cloth.  I'm hoping that will speed painting along somewhat since, once we get into August, and even in a normal year, things start to get busy with preparations for the new academic year.  Of course, 2020 has turned out to be a very strange year so far, which has thrown off the summer and related hobby activities.  No doubt, the ongoing pandemic will present a variety of additional unforeseen challenges as we barrel toward and into the autumn semester/term.
-- Stokes

I glue my cavalry figures onto the horse before painting, using Elmers Glue. Foot figures get glued to a small cardboard square for painting. I've never been a fan of the glue several figures to a stick, finding it hard to get my brush in between the figures to paint some of the details.

I hope that you have air conditioning in this 90F heat wave, or take up quarters in the cellar.
11:21 AM

Heinz-Ulrich von Boffke said…
Yeah, I think the next time I undertake any cavalry, I'll go back to gluing the riders onto their horses before any painting begins. Live and learn as they say. Both, A/C and many hours down here in Zum Stollenkeller, which is several degrees cooler than the ground floor and upstairs. Whew! I've never done particularly well in high heat, but the older I become, the more it takes the wind right out of my sails. Mowing the lawn, even during the early morning or evening hours, when it is this hot just about ruins me for the rest of the day.

James Fisher said…
That is a fabulous painting!
It's most interesting to read of others who are keen on painting horses and riders as one. I used to use the figures stuck on sticks with blu tack technique, but have been painting them as pseudo one piece castings for the past two or three years; and have not looked back. Plastic 1/72nd is my usual scale and PVA glue my sticking mode of preference. I find that it works best to put a little glue on both, let it partially set and then join together. Undercoat then goes on the two as one piece. Should I happen to do a less than perfect job with my production line gluing, I simply glue again, re-appling some undercoat, if necessary. If I wait too long (especially in warm/hot weather) and the glue sets before joining, a little extra applied on top of the dried glue and it works a treat!
I now also glue figures (infantry, horses, guns, artillerymen) to their bases and paint them as a 'formation'.
I have some metal figures too and use a product here called 'multigrip' (a contact cement), which works really well with them. Either glue seems to work for metal to plastic (figs or styrene bases).
I hope that little ramble is of interest?
Regards, James
8:45 PM

Simon Millar said…
I have some old horses that will never be used, so I blue tack my riders to those, paint them and then glue to intended horse. As long as you're careful when gluing to the horse all will be okay. Regards, Simon
6:07 AM

Heinz-Ulrich von Boffke said…
Thank you for the suggestions, men! Very helpful ideas there. I'll try them with a future cavalry formation.