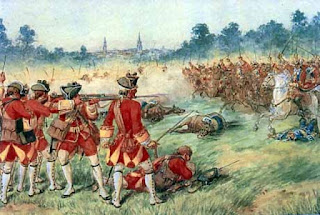 Here is a stirring scene, of Britain's 25th Foot repelling presumably French cavalry, which many of us have in mind for our Horse and Musket-era troops atop the wargaming table.  I believe the painting is of an event that took place during the Battle of Minden. Richard Simkin was the artist.


Since just after mid-November, I've been thinking more closely about 'disorder' in battles that took place during the age of linear warfare.  Maintaining good order seems to have been rather important in the conduct of battle during the 18th and very early 19th centuries.  Disorder, by contrast,  could occur pretty frequently as the result of numerous developments, some as mundane as movement across uneven ground or taking part in a firefight with enemy infantry, to something more serious like being involved in close combat, rare though it may have been, or taking heavy casualties at the hands of enemy troops.  Dressing the ranks after activities like these took some relatively calm, undisturbed time for the NCOs and, presumably, junior officers to sort out.

As I continue to read, (re-) read, develop, and clarify my thinking on all of this, I realize how influential properly dressed troops and, conversely, disordered  troops were in the conduct and eventual outcome of virtually any battle of the era.  To me at least, disorder and the problems that could come about from it are things that it seems vital to reflect on the tabletop if we aim to highlight a few of the features common to battle on land in mid-18th century Europe.

Like many other wargamers past and present, I've gone back to the bookshelf and combed through several books for further information on the subject.  Here are some specific points on the matter made by Christopher Duffy and Brent Nosworthy:

“It was rare for the niceties of the parade ground. . . to survive the first moment of any action” (79).

“Disorder could happen easily during an advance that happened too fast” (1987, 201).

“Regularity broke down altogether at anything faster than a slow walk” (203).

“The ranks and files would become increasingly disordered as movement continued [toward the enemy]. . . The formation would gradually become disordered” (Nosworthy 59).

“As the opponents neared one another, charges would be ordered with various results, friendly battalions could be found running for safety, holding their ground, or even overzealously chasing down bodies of infantry they succeeded in pushing back” (88).

“Once the line was engaged, it became extremely difficult to continue to command an extended line as a single body.  Localized activity would fragment the line, breaking it up into a series of engagements each with its own life” (ibid.).

“The men required elbow room to bring their weapons to bear and reload after firing. . . The frontage of a battalion could expand by 25% or more” (427).

“In the confusion and smoke, entire battalions would remain motionless and unengaged, awaiting the outcome of the battle as it raged in front of them or on some other part of the battlefield” (88).

“Ragged and ineffective fire intensified confusion among the ranks. . . the line would often start to waver” (311).

“Disorder caused by men falling to the ground or left behind as a result of the close range fire significantly increased the attacker’s susceptibility to a counter-charge” (63).

“Progressive degradation” [in the condition and fighting ability of a unit resulted from ongoing action] (Duffy 1987, 251).

“[Contributing to the gradually increasing loss of order] The rhythm of musicians [drummers] at one part of the line would be different to those elsewhere. . . [leading to] a slight variance in cadence. . . inevitably resulting in the line becoming disordered” (Nosworthy 62).

“The most significant drawback of a lengthy [cavalry] line was that. . . it was the most susceptible to disorder through movement and slight variations in terrain” (Nosworthy 265).

“Formation[s] would soon be disordered if either a lengthy distance had to be traversed or even slightly rough terrain encountered” (265).

“49 times out of 50 one side hesitated, became disordered, then fled before any actual contact was made” (271).

Confusion, smoke, and poor visibility contributed to a gradual loss of order (255).

“If the casualties were heavy enough, morale would be lowered further undermining any remaining willingness to move and fight” (Nosworthy 32-33).

“What is it that destroys the courage of troops in action, what makes them take to their heels? . . . the losses they sustain” (248).

I spent some time last night after The Young Master's bedtime trying to put these notes into some sort of order to help formulate and clarify my own thoughts, and I'll share the specific rule that is emerging in my mind in a later post.  Not completely there quite yet, but I've now got something specific to work with.

How simplified can we keep all of this though?  The aim is to keep things as simple as possible though, which means some fudging in the name of ease and playability.  Sounds like a discussion on playability versus realism from 1974 all over again, right?  But abstracting things a bit in the name of keeping things manageable and moving along is a compromise I'm willing to make.  As mentioned in an earlier post, I'm not after strict simulation but rather something that gives a flavor of what mid-18th century generals and regimental officers might have faced in battle, namely difficulty in maintaining control once in contact with the enemy, changing situations, how these make original orders from higher up the chain of command less relevant, plus the surprise, and frustration that arise as the battle unfolds and commanders scramble to meet the new challenges facing them.

As for today, Saturday, we are in the midst of an ice storm here in Mid-Michigan, so Young General de Croissant and and ol' General von Dad did not venture out for his Tae Kwon Do class this morning, thinking it more prudent to stay off the roads.  Instead, we have a date to begin assembling a small robot kit sent to Paul by his aunt for Christmas given his interest in STEM (Science, Technology, Engineering, and Math). . .  With maybe a bit of brushwork on those Minden Bosniaks later this evening.

Wellington Man said…
I've been pondering about these very same issues for decades, Stokes, so I await your conclusions with baited breath. The nearest thing I ever came to it from personal experience was during the muddy rugby games of my youth, in which the situation could turn in an instant if one side lost cohesion.
Best regards
WM
2:23 AM

February 24, 2019
Stirring scenes like this one, courtesy of the late Peter Gilder, are largely responsible for the way I go about the wargaming hobby now.  Coincidentally, this is one of three early issues of Miniature Wargames that somehow turned up on the shelves of a hobby shop I frequented as a callow youth during the early 1980s.  I still have the original copies, #6, #7, and #12, although I have since replaced them with 'newer' less well-thumbed copies as I have filled in holes in the collection of hobby print matter.  Finally, I'll go out on a limb here and state that the covers of 'modern' wargaming magazines in current publication are rarely as charming or inspiring.

At its heart, my wargaming hobby stems from and grew out of playing with green, gray, and blue plastic toy soldiers, tanks, etc. as a child during the 1970s.  Probably like many of you  GD of S visitors.  I also have very vague recollections of paging through a Phillip O. Stearns (?) book on model soldiers a…
7 comments
Read more